The UK has, famously or infamously, a First Past The Post [FPTP] electoral system. Winner takes all. There was some logic supporting such a system in, say, the 1950s, when over 90% of the electorate of the UK voted Conservative, Labour or Liberal, and in fact almost entirely for the first two. In the 1950 General Election, nearly 97% of those who voted voted for the “three main parties”. At that time, the FPTP system provided stability and a certainty of result in most general elections. Indeed, most UK adults were actually members of those parties. Even as late as 1983, 65% of UK adults belonged to a political party, mostly the “big three” and in fact mostly the “big two”. That contrasts with somewhere between 0.5% and 1.5% now, in 2019.

The figures are not entirely what they seem, of course: millions were inducted into the Labour Party by default, via their trade union membership (itself then compulsory in many industries and occupations); the Conservative Party was also packed by people who joined at least partly because they wanted to belong to Conservative clubs, i.e. social clubs (with bars). Labour also had social clubs: as it might be, the Toytown Working Man’s Club or Labour Club. Millions also belonged to the Young Conservatives (a mainly social organization and, unofficially, dating forum).

The above reflected the relative homogeneity of the UK population at the time. That homogeneity and cohesion has been shattered by social and demographic changes. We see now that FPTP voting does not reflect even the votes cast, let alone wider opinion. The chart below, for example, shows the votes cast in the South East of England, vis a vis Westminster seats won, in the 2015 General Election. Even that chart does not tell the full story, leaving out the views of those who had to compromise because there was no party which reflected their true views standing in the particular constituency: they therefore voted for the nearest party to them, ideologically, or just refused to vote (33.6% of those eligible to vote did not vote! I wonder what kind of party might capture that more-than-a-third of eligible voters?) 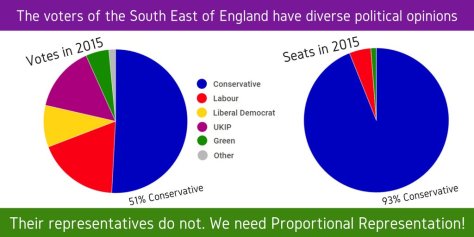 Also, we see that the way in which constituencies are sliced-up is a fairly arbitrary one: 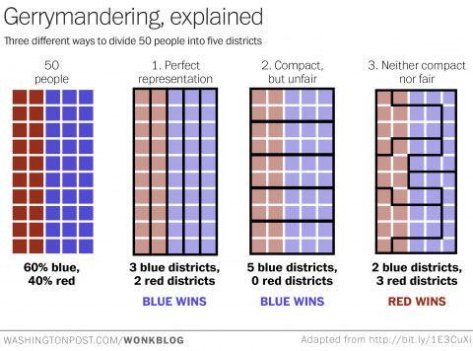 The Boundary Commissions for the four UK countries delineate the constituency boundaries in such a way as to preserve a notional “balance”, a completely outdated one, based on that 1950s paradigm. So we see that some constituencies are “safe” Conservative or Labour and that a few are or were in the past Liberal Democrat/Liberal . A minority of seats are designed to be “marginal”, whether Con-Lab, Con-LibDem, LibDem-Lab.

The result of the above system is that, at time of writing, 80% of voters do not think that any party speaks for their views or for them.

To put it another way, there is a battle between anger and apathy.

Obviously, there should be a more responsive electoral system, based on one of the proportional voting systems already in use in many countries. However, FPTP is still the voting system in use in the UK for Westminster elections. That being so, tactical voting is the only way in which the ordinary voter can influence the result.

Take a fairly random example, Chesterfield, the constituency of Tony Benn for many years. Chesterfield, first contested in the 1880s, has been regarded as a safe Labour seat for most of that time. The Conservatives won it only once, in 1931, when the Liberals, who had won the seat several times previously, declined to stand. The Liberal Democrats won in 2001 and 2005, after the retirement of Tony Benn. Labour won again in 2010, 2015 and 2017.

Tactical voting could, at times, in fact quite often, have prevented Labour from winning Chesterfield. The same is true in many Lab or Con seats across the country.

The sting in the tail is that, yes, the voter can vote tactically, but all that does, usually, is to replace one System dummy with another, and one label with another. In a situation where 80% of voters think that no System party represents them or speaks for them, that is cold comfort. 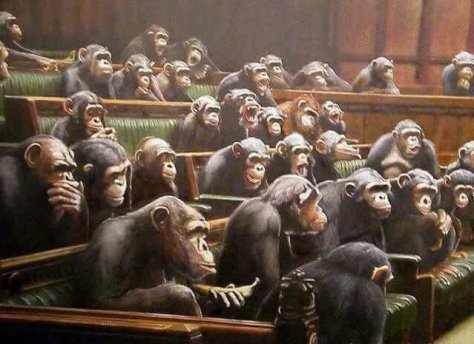 One thought on “Tactical Voting, the Only Way Around the First-Past-The-Post Electoral System (but it may be pointless anyway)”