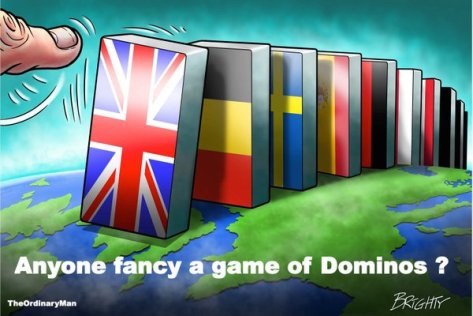 I am writing this on 21 March 2019, so only 8 days before the supposed exit of the UK from the European Union (which, as I write, has now apparently been deferred for 2 months; the EU would not even give Theresa May the 3 months for which she begged).

The completely unexpected (by the System) EU Referendum result of 2016 has had the System scrabbling over how to keep the UK in practice signed up to the NWO/ZOG [New World Order/Zionist Occupation Government] agenda, in which the EU is key. All of the “solutions” and “alternatives” EXCEPT real Brexit (aka “No Deal Brexit”) are part of this scrabble. The preferred NWO/ZOG idea will be to “choose” between two or three non-alternatives, probably sanctified by a pseudo-“democratic” plebiscite or “People’s Referendum”, thus presenting the coup as a popular “choice”.

Already today, the msm noise is about “a million people sign petition to stay in EU!”, without pointing out that (even assuming that the names on that petition are genuine), that is only 1 million out of about 65 million in the UK! Over 17 million bothered to get out to vote to Leave the EU, and that was enough to win the Referendum, which was supposed to decide the issue on a simple majority vote.

Britain should have left the EU on time (and still can) without this vulgarly-called “deal” nonsense. Once out, Britain could (still can) come to mutually-convenient customs arrangements with the EU bloc. Something would sooner or later, probably sooner, be agreed. Maybe something not too different from now, but we would control our borders and our laws.

The general public have been subjected to Remain “Project Fear” propaganda for about 3 years now, since before the Referendum even happened. Much has been proven to have been false, but some has been (looked at superficially) vindicated, in that a few business investment decisions have been deferred or UK plans halted. Not a shock. Business hates uncertainty. The cause for much of the drop-off in investment can be blamed not on Brexit itself, but on the uncertainty which an inept government has caused.

Now it seems that there is every chance that Brexit will be deferred for months, possibly for years, or that Theresa May’s pathetic “deal” will lead to a “Brexit in Name Only” (“Brino”), which would leave the UK actually worse off than it is at present!

At the same time, it is now said that, even if immigration from the EU is slowed, the UK must expect an increase in immigration from places such as India! As I have blogged in the past couple of years, Brexit is and means more than Brexit. The Leave vote was a protest against, yes, the EU and its control over Britain, and, yes, also against EU low-wage immigration, but very much also against globalization, against non-European immigration etc, and in favour of heritage, identity, our culture and history. In fact, the EU immigration most people opposed was not so much Polish tradesmen and French bankers, but Roma Gypsy thieves and scavengers from Central and Eastern Europe, as well as drunken thugs from parts of the Baltic and elsewhere. That, and the sheer numbers involved, which stretch UK infrastructure to breaking-point.

The complete ineptitude of the Theresa May government has led to Britain losing face very badly. May and her ministers (idiots like Boris Johnson, at first pro-EU Remain and now pretending for reasons of personal careerism to be pro-Leave) have been comprehensively outplayed by the EU Commission and the main EU political figureheads. Theresa May has lost all credibility, but with her loss of face has gone the government’s credibility (what little it had) and that of Britain as a whole.

In any event, it can be seen that, particularly focussing on Brexit, very few people think that this government has been anything other than incompetent; few seem to think highly of Labour either. That casts the politics and party politics of the next couple of years into the hazard.

As far as the basically Leave-supporting ~50% of the population is concerned, that bloc knows that it has (as I predicted) been betrayed one way or the other. In terms of what they might do to protest, probably nine-tenths of those people can be written off as pub blowhards, leaving about 5% of the UK population as seriously disenchanted with the System (though only a tiny proportion even of that group will be awake enough to see “ZOG” as the enemy). That 5% of the UK population, perhaps three million, are the important ones. They are the potential core of any new social-national movement, they are the ones who could, if the stars are in favour, overcome the System and create a national wave which can sweep away the rubbish. We must look to those few million, and perhaps at first to only 1% or 2% of them, 30,000-60,000 people, to be the vanguard of a new society.

The period between now and 2022 will be the best time that has existed since the 1930s for social nationalism, not only in the UK but across Europe.

though not without criticism…

So now Leave supporting MPs are routinely referred to as far right extremists, who ‘should be in the National Front!’ Most of us are just trying to represent our Leave supporting constituents. https://t.co/0oszUh3wzw

Expenses cheat, Jewish lobby doormat and pro-Israel manipulator Margaret Beckett MP speaks in the Commons in favour of a “confirmatory” referendum to prove that the stitched-up non-Brexit has been “approved” by the “people” (the fear-stampeded, tired-out, brainwashed people…). She is a thief and a fraud and a total traitor. Put her on trial.

Margaret Beckett who also voted for the Iraq War and was caught up in the expenses scandal for pot plants and hanging baskets £600, second home modernisation €15k, 75k second mortgage, €1.5k on a washing machine – yeah she’s one to be trusted!!

So let’s see: Oliver Letwin MP, a Jew, used to work for Rothschilds; he is now pushing the government agenda around Brexit or fake Brexit. Macron, posing as President of France, pro-Jew, pro-Israel, and surrounded by Jew businessmen, used to work for Rothschilds. John Bercow MP, Speaker of the House of Commons, anti-Brexit, is a Jew too. What does all this mean? How hard can it be??