When I first read the Private Eye piece below, I included it in a blog article under the subtitle (taken from Schiller) “Against stupidity, the Gods themselves struggle in vain”. It is worth clicking on it to read the whole short article.

I understand that Corbyn’s advisers (perhaps other than Milne, if Private Eye is right) thought that the best strategy would be to wait it out, tough it out, take all the slings and arrows of being called “cowardly”, “scared of the electorate” etc, and refuse to be drawn into an election battle which Labour would be unlikely to win. As that Private Eye article says, both Corbyn and LibDem leader Jo Swinson were convinced that they would do well in any snap election.

The fact is that Boris-idiot could not have called an election without at least the Labour Party MPs voting for it. The few LibDems were of course a mere add-on. Had Labour not gone along with the Conservative Party demand, Boris-idiot’s government would have limped along for a while, powerless, hopeless, until the Conservative MPs forced Johnson out and replaced him, probably some time in 2020.

Corbyn’s decision to submit his party to an electorate very unfavourable to him and Labour was one of the stand-out political mistakes of the past half-century. I imagine that future students of Politics in universities will spend much time on the 2019 General Election.

The same was of course true of Jo Swinson, but in her case the effect was minimal (except to her personally, as her own constituency chucked her out). The LibDems lost, on paper, nearly a dozen MPs, but most were recent defectors from other parties. The LibDems did decline from the 2017 position, but few expected them to do really well anyway.

Brexit Party? Farage’s absurd decision to stand down his candidates in Conservative-held seats was another huge error, in addition to which he stabbed his own candidates and members in the back. Madness, and very dishonest.

It might have been different for both Labour and LibDems even so, had Farage not done what he did. The Brexit Party was floundering in the opinion polls anyway, but would probably have done well enough to get a few thousand votes in most seats, thus gifting both Labour and the LibDems seats, Labour in the North (mainly) and the LibDems in the South (mainly). The Conservatives might have ended up with dozens fewer seats, Labour and LibDems with an equal amount (together). That might have resulted in the Conservatives either having a small majority (under 10) or no majority.

The net result now, however, is that, without having really “won” the election (the Conservative vote having increased by only one point over that of 2017), the Conservatives have the power to impose finance-capitalist dystopia on the UK.

We read that Ayn Rand devotee and pro-Israel Pakistani nut and Muslim apostate Sajid Javid has written to all departments of government demanding a 5%+ reduction in spending plans. So much for “an end to austerity”. Yet Javid is apparently going to back the disastrous and pointless HS2 vanity project, with its huge costs and equally huge environmental damage.

Labour now tries to find a new leader, one who will magically win back those white English and Welsh and even Scottish former Labour voters who have voted with their feet either in not voting at all, or voting somehow other than for Labour. A monumental task. The white British people have been betrayed time and again by Labour:

I do not see much future for Labour as it now is. Any attempt to move Labour to some ill-defined “centre” must be doomed to failure in that Brown lost, Miliband lost, and in fact had Blair been there in 2010, he too would have lost.

Having said all that, statistics show that the Conservatives are only favoured by those over 50, and particularly by those over retirement age. That being so, the field is more open than seems to be the case superficially.

For me, it is clear that what the bulk of the British people really want is an intelligent and effective social nationalism. That wish, however, is subconscious for the vast majority. If a party or movement could emerge of such a character, and if it could survive and thrive, then anything would then be possible and we could really set to.

The “Twittersphere” is agog with the news that Katie Hopkins has had her account suspended. The Twitterati are ecstatic…

Now I am not on the same ideological page as Katie Hopkins, who is pro-Jew, pro-Israel and also pro the kind of “Conservatism” that I despise (finance-capitalist, Ayn Rand “libertarian” etc), but I have no wish to take away her freedom to express opinion. The pseudo-socialist Twitterati are not so liberal. They love it that a huge transnational enterprise can simply take away someone’s free speech (so long as the victim is not on their side of the argument…). What silly little people they are! 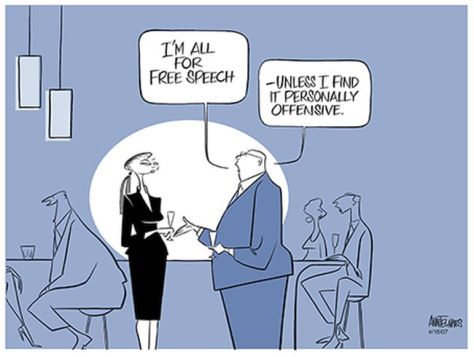 The ironies of the Katie Hopkins suspension are several, but one is that Katie Hopkins is usually so eager to support Israel and Jewry, yet the prime mover in the suspension seems to have been Rachel Riley, the Jewish TV presenter or whatever, with the Twitter Zionist claque right behind her.

Twitter has expelled most dissenting voices (including me, in 2018), and so is left with three or four types of tweeter (some may fall into two or even three groups):

The extent to which UK Twitter is out of touch could be seen during the 2019 General Election campaign; Twitter was mostly pro-Labour or LibDem, except that the Jews were attacking Corbyn and Labour generally. Twitter loves “refugees” and indeed all immigrants. Twitter knows who obscure American sports persons are. Twitter mostly believes the official “holocaust” farrago.

As noted above, the ideological emptiness of the pseudo-socialist and/or “anti-fascist” tweeters is shown up rather well when they defend the ability of huge capitalist enterprises (the owners of such or the little employees of such) to shut down the free speech of someone they, the Twitterati, dislike. They’re idiots.

Here is one example:

Looks like Katie Hopkins has been temporarily suspended. One step forward in getting rid of one of the worst hate actors on Twitter. https://t.co/iAw7DD7R6f

That’s Mike Stuchbery, self-styled “historian”, “journalist” etc, of whom I have blogged previously:

I love how it was a Muslim and a Jew who tag teamed to get Katie Hopkins off of Twitter. Lol. #divinejustice https://t.co/HfJ0dAPRd7

A few, even on Twitter, are standing up for freedom of expression: see “Ross”, below

All respect for you well and truly lost. You will deserve the shit you get for this, nobody is making you read Katie Hopkins twitter feed. Freedom of speech is a monument to modern civilisation and people like you are walking all over it.

Well, as in previous “cases”, we see those who are behind all or almost all of this repression of freedom:

Well done to @RachelRileyRR and @CCDHate for taking this action against Katie Hopkins. There must be no platform for hate speech online. Thank you for listening, @Twitter. https://t.co/0lMXStNPPD

— Board of Deputies of British Jews (@BoardofDeputies) January 30, 2020

Some of my own experiences: 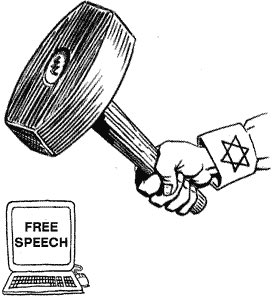 I wonder whether those applauding ever-deeper censorship and repression in the UK, Germany, France, USA etc ever think about what might result if all previously-legitimate forms of socio-political expression and/or dissent are taken away?

The more “socialist” types on Twitter and beyond tend to suffer from the same ideological dissonance as, say, Corbyn, John McDonnell etc. They oppose Zionism and Zionists in and around Israel/Palestine, yet do not oppose the forces of Zionism where they are far more powerful (in most respects), meaning in the UK, USA, France etc! It is pointless getting worked up on behalf of the poor old Palestinians and their exploitation by Zionist Jews, if you ignore similar exploitation happening in your own backyard! Here (below) is one poor sap who evidently has not yet made the connection:

Anti-semitism is abhorrent and can never be condoned.

That made clear, what also cannot be ignored are the repeated atrocities, perpetrated by the Israeli Government, against innocent Palestinians.

With that in mind, I feel it is in the public interest to highlight these clips. pic.twitter.com/xD0EPEzuQj