Or to put it another way, “addled art”, a symptom of the society that produced it and tolerates it.

“In Addled Art, [Sir Lionel] Lindsay stated that nature was never ugly; only in degen­er­ation and decay could the spirit of ugliness dwell. So how did all this modern ugliness get foisted on an unsuspecting public? Lindsay’s answer was crisp. Three quarters of the European art dealers, critics & col­l­ect­ors were Jews. Jews excelled in the discovery of great val­ues, well ahead of the Aryans. It was due to Jewish influence and Jewish money that naus­eating paintings were sneakily slipped into galleries and priv­ate collections. “They have become the all-powerful masters of a rich and beautiful domain. They have their press, for making and destroying reputations, and in every country their agents are but hucksters”.

Apply that extract about Addled Art to the Damien Hirst and Tracey Emin (etc) prominence since the 1980s. They were promoted by wealthy Jews such as Saatchi.

I once happened to share a table at a pavement cafe in Museum Street, London, with a fellow who was a Yugoslav (I think Croatian; this was 1989) and who had a nearby studio. He was a pretty fine artist (mostly sculpture, but also painting) judging from the photographs of his work that he showed to me. He told me that he was having to fight constantly against the prejudice against figurative art. The “experts”, critics, dealers did not want it. I suppose that most of those making money out of non-figurative art, in London (as in New York etc) were and are Jews.

A favourite piece of music

An old question. In fact, one which has been debated since ancient times: “People learn to be Jewish from their parents.” [Juvenal, The Satires, Satire IX, lines 14.96-106]. I suppose that that is why the Jew establishment is far more strict in trying to ensure that Jewish festivals are celebrated by all Jews than are the Christian churches and rulers (at least since the 16thC) in relation even to the most important Christian festivals, Christmas and Easter (in the West, Christmas takes pole position, but in Russia and the Orthodox world generally, Easter is the more important of the two).

Even people with my general outlook, who might say that “race is the root-stock, culture is the fruit (or flower)”, are at the same time compelled to acknowledge the importance of environment: upbringing, education, the way children and young people are treated.

Those who take the view that race, ethnicity, nationality etc are of no importance are as mistaken as those who believe that only those factors are important causally in terms of producing finished members of society.

News from the UK’s ZOG regime

The allegations against Priti Patel which have led to this unprecedented step: https://t.co/PKCdsR6bt4 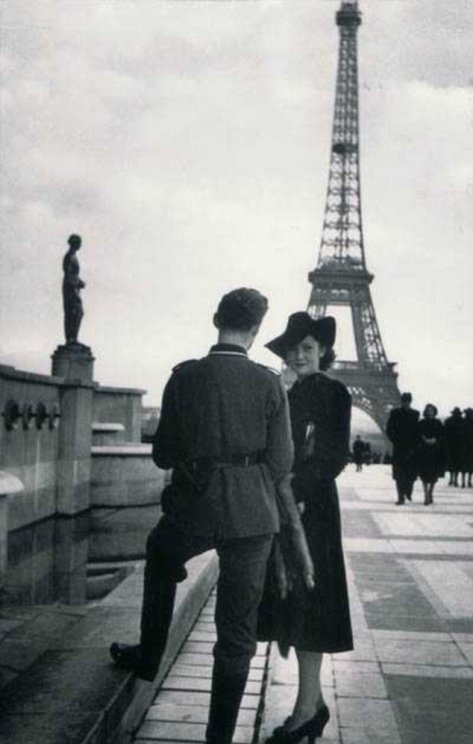 [above: Paris under German occupation, 1942]

I have not been to Paris since the 1990s, except to change planes a few times at CDG and Orly (and a couple of transfers between those airports). Even in the early 1990s, the changes, under the surface, were great as compared with the 1980s or, even more, my first visits, in 1970 and 1971. In 1971, when I stayed for three weeks with a very nice French couple in the 5th arrondisement, Paris was totally different from London. Now not quite so much. The EU, and/or societal change, has led to a degree of convergence (with the caveat that I have not stayed in Paris for about 25 years). At least I have missed the “City of Light” being invaded by Africa and the Middle East to the extent that it has been in the past two decades.

It will be recalled that Stuchbery claims, risibly, to “work three jobs”. Here he is, today, in Munich, claiming to be on holiday, while playing at his faux “journalist” persona (he scribbles a bit for the pathetic online “newspaper”, Byline Times).

His UK associate, “Roanna, AntiFashWitch” is still remarkably quiet about what is happening to Stuchbery’s crowdfunded legal action against the activist known as Tommy Robinson. They have raised, in the past 4 months, just over half the £20,000 for which they appealed. Even now, some naive mug donates £5 or £10, about one donation per week.

To date, the only action taken by their retained solicitor seems to have been a simple and undetailed Letter before Action to Robinson (sub nom Stephen Yaxley-Lennon), sent in November 2019.

I have always been sceptical about the “legal action” they propose(d) and about what will happen to the (wholly inadequate) monies that they have raised from about 690 members of the public.

I have been meaning to add Priti Patel to my “Deadhead MPs” series, but have always been sidetracked. At least this latest scandal involving her will provide extra material. “Always look on the bright side of life, doo doo, doo doo doo doo [etc]”.

I have from time to time observed that only the accession to power in Uganda of Idi Amin saved Priti Patel from spending her life behind the counter of a Kampala grocery store. Now we see (again, recalling her previous fiasco as International Development Secretary) that she has proven inadequate for the role of a Cabinet Minister. She simply does not have the horsepower…That, and the fact that her only way to deal with others is to try to intimidate them. I hope that she is binned soon. That will be another doormat for Israel gone up the chimney, at least politically.