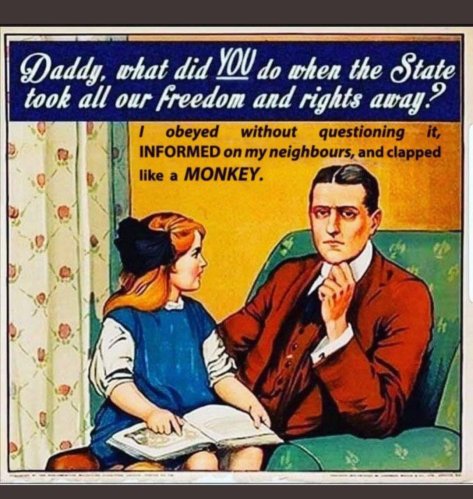 We will not escape from this until the supporters of the shutdown admit they made a grave mistake : https://t.co/dNzjtt9lkS

But our teenage government are qualified to act? If you dismiss my qualification to comment, why do you accept this talentless, scared Cabinet’s qualifications to ruin the country? They are expert in nothing. https://t.co/nG1FvU1Tyg

Again, this by Hitchens hits the nail on the head. Why oh why do people simply accept without question what deadheads like Boris-idiot and little Matt Hancock say? I put it down to centuries-ingrained English or British deference, a class-based behaviour, though in fact “Boris” is a part-Jew, part-Turk, of very peculiar origins, and basically acting a part, the “upper-class” “Englishman”, neither of which he is. The training in privilege received at Eton, then at Oxford, helped. As for the rest of the present Cabinet, they are mostly Jews or part-Jews, Indians etc, and the few English ones of a “beggar on horseback” type, such as Hancock.

Sadly, a certain confident manner and a Standard English accent (perceived as “posh” by the plebs) gets many mediocre types rather far, not least many MPs. People really should look at the real levels of intelligence, education and other qualities of “our” MPs. Very poor, for the most part.

I am not ‘obsessed’ with it, the people who want to impose these futile muzzles on others are the obsessives. I simply point out that there is no good evidence for their use outside a few very narrow circs, and that the muzzles are a further humiliation of a cowed population. https://t.co/XIVzy5SMpU

I have to say that, though I am far from agreeing on everything with Peter Hitchens, he must have the patience of a saint, the endurance of a Trojan, and the hide of a rhinoceros to put up with the Twitter mob as he does. I admit that I myself would simply not have the patience. I can only assume that Hitchens perceives what he does on Twitter as a duty of some kind laid upon him.

Summed up in 60 seconds. We will not escape from these Maoist panic rules until the government (and much of the media) admit that throttling the economy and mass house arrest were a wild, disproportionate error. https://t.co/dNzjtt9lkS

And these muzzles are also no use . The WHO itself says https://t.co/xC6QBEr5Cm 'If you are healthy, you only need to wear a mask if you are taking care of a person with COVID-19.' https://t.co/B2eMJGi5ss

Thank you for your kind words. https://t.co/9w6QBpBzcp

Liberty is being sacrificed in pursuit of popularity https://t.co/pQjBED84dD via @theconwom

ONS figures, up to 1st May 2020 = 3911 deaths for people up to age 64. Approximately 57 deaths per million for working-age people. Are we really locking down a country with those statistics? The elderly and vulnerable can choose to isolate themselves. https://t.co/Ey6102epgg pic.twitter.com/7uDnW6SPU8

One aspect that made me laugh from the start of the Coronavirus “pandemic” (which is now, in the UK, not even an epidemic) is that all or almost all the pseudo-socialist mob on Twitter have been in favour of ever-more restriction of liberty, ever-more rules and ever-stricter “lockdown”. It is one of their psychological flaws. The need or perceived need to be told what to do.

One saw it in the Brexit situation, that idea that the UK’s civil liberties etc (free speech being the greatest), fought and struggled for over hundreds of years by British people could now only be maintained by a pack of tired Eurotrash politicians and bureaucrats in places like Brussels and Berlin and Strasbourg. In fact, the wish not to be free was palpable in the Remain camp.

Indeed, would anyone think himself “free” in an EU where to question any of the often absurd details of the “holocaust” fable is actually a criminal offence?!

We have seen, all through this “crisis” or scare, that the Labour Party official Opposition has been pathetic, just supporting the Government! Really really pathetic. I think I understand why Keir Starmer is doing it. He really, at heart, would like to see Labour as part of a fake “National Government”, thus giving Labour some reflected credibility as part of that Government. “Boris”, though, thanks to his unmerited and unexpected 80-seat Commons majority, does not need Labour. The result is that Labour is a total irrelevance.

Likewise the TUC. I remember from my teenage years the TUC as a vast, monolithic, almost Soviet bloc of unions, powerful and of national importance whether one supported or opposed their actions. Today on, I think, Sky News, up pops Frances O’Grady, its General Secretary, and all she can do, really, is bleat a little. A waste of space. The TUC still has 5.6 million members (Wikipedia; another source says only 3.69M), but that is only about 1 in 5 employees; if you include the self-employed, probably 1 in 6. Like Labour, near-irrelevant.

The “Cabinet minister”, Jew Grant Shapps, on TV news this morning, posing in front of a small bookcase prominently featuring two Union Jacks. Surely, in view of his Zionist ideology and one-time position as head of the youth wing of Bnai Brith UK, Israeli flags would have been more fitting?

BREAKING: UK’s highest court @UKSupremeCourt rules that Gerry Adams was imprisoned illegally by British government when was interned without trial in early 1970s. The Supreme Court has quashed his two convictions for trying to escape from the Maze Prison @rtenews @RTENewsNow

Already on its knees because of unreformed libel law & rapacious lawyers, the press will be terrified now to print the truth about Adams and many of his IRA chums. Yet Gerry Adams was among those directing an organisation dedicated to mass murder. https://t.co/P5RAN5Syg5

I should be used to it by now but it still astonishes me that Gerry Adams has the gall to complain about violations of due process, given the IRA's record of torture, murder and disappearance. What due process did Jean McConville get? Robert Nairac? Tim Parry? https://t.co/482TXgyZib

In 1984 I was present when Gerry Adams and two other senior members of The PIRA arrived from Belfast for an Army Council meeting in Monaghan Town…I was there…I seen and I listened…Why dont you get John the piss artist to issue legal proceedings over that…Comfort Letter! https://t.co/O3zASsIsYY

We live in a society where the likes of Gerry Adams have their supposed “rights” fastidiously upheld by a “Supreme Court”, but also a society in which Jez Turner was convicted and actually sent to prison merely for saying that Jews should be deported from the UK (as has happened several times in history), and a society in which Alison Chabloz was prosecuted and sentenced merely for singing satirical songs about proven “holocaust” fakes!

[above: the satirical singer-songwriter, Alison Chabloz, at the piano]

Annexation would be an act of aggression – and the UK government should make clear now that would lead to sanctions. https://t.co/A5I9mZ7wvk

Not that Corbyn is “wrong” in this, but he has just spent 5 years supporting the mainstay of the Israeli/Zionist state, i.e. the “holocaust” narrative! Also, decrying anything supposedly “anti-Semitic”. In other words, he is against Zionism in the Middle East, but —in effect— supportive of it in Europe, North America and Australasia!

Ah, well, Corbyn is back in his comfort zone, bleating about matters far away, which he has no power to influence or change…

If required to wear a muzzle, here's mine. pic.twitter.com/ADSI4pMWKi

Also known as “the shoplifter’s special”…

For more than six weeks I have been abused and smeared as someone who cares more about money than life, because I have warned that the smashing of the economy by the government was a major threat to the NHS. Now the govt admits it. Apologies welcome: https://t.co/i0LZCAU5Qh

'We have both an eye-watering number of avoidable deaths and a staggering amount of avoidable economic damage. The purported trade-off between lives and jobs – always a false choice – has instead spared neither. It is the worst of both.'https://t.co/LGS6BRnqkx

Actually, the “facemask” nonsense is the ideal excuse for anyone asked in court, “and why were you walking around covering your face?” The criminal defence barrister has a new tool to put in his box, along with “it was someone who looked like the defendant”, “his fingerprints were there because he had been there previously, and legitimately…” and (after conviction) “the defendant has had an unhappy life to date…”

I acknowledge it. @vidur_kapur I am glad Prof Ferguson has defenders, but I am not one of them . My own opinion of Imperial was greatly influenced by the Foot and Mouth outbreak. I saw the results of their advice. Farmers weeping as their healthy beasts were killed and burned. https://t.co/KklzCg11e1

I am sure that laughter is the best weapon against this comic-opera despotism of Dear Leader Kim Jong Son and his dreaded Health Commissar Mat Hang Kok. https://t.co/WldDjseWlq

@l1ttkeherbert . I love your use of ‘virtually’ to mean ‘not’ . As in , not Japan, not Taiwan, not Sweden. So not all. There is *no* congruence between shutdowns and reduced deaths. Absorb this, and you can start thinking, which I recommend. https://t.co/ThkKVyB3y3

NZ did not ‘nail’ anything. It had very few cases because it is so remote. No connection has been shown between its shutdown and the continued low instance of Covid-19 there. Why are people so *gullible*? Taiwan and Japan have no shutdown and few deaths. https://t.co/7XTHSAWKWG

Neither I nor anyone else has presented me as an expert @bedlingtonjamie. I am a journalist, disseminating the work of actual experts, largely denied a platform by flaccid or one-sided media. Why do you never attack the lack of expertise in the * government*? https://t.co/B0sbRiZKnX

People, most of them, are motivated by will or by emotion, not (and certainly not primarily) by thought.

A little night (but not light) music