The seriousness of this cannot be exagerated

UK reveals near half a million new benefit claimants in past 9 days https://t.co/RFlbIepy3O via @financialtimes

Pity that the Economics Editor of the Financial Times cannot spell “exaggerated”, though. Another sign of the times, I suppose.

The above report is re. the UK. Unemployment is now spiking in the USA too:

In other words, 1% of the US population registered for unemployment benefits in one week.

Re. the Jew exploiter Philip Green

He didn’t even sack them which would have afforded them some rights, he has laid them off on no pay when he could have used the government furlough scheme. Horrible man

Below: here he is, a few years ago, on one of his mega-yachts, pouring Champagne over the heads of other Jews and various “hoes”:

Blast from the past: the Adelphi, Liverpool

Back in the day it was ok. Now it’s a grim hellhole.

Sorry to hear that the Adelphi Hotel has fallen on hard times. I stayed there for a few days, ungazetted, when an ad-hoc Soviet ballet company (mainly Bolshoi dancers, if I remember aright) was in Liverpool. That would have been in about 1985 or 1986. My then girlfriend’s small suite had a sitting room with a kind of curtained-off bedroom. An entrance hall led to the sitting room and also to a spacious bathroom. 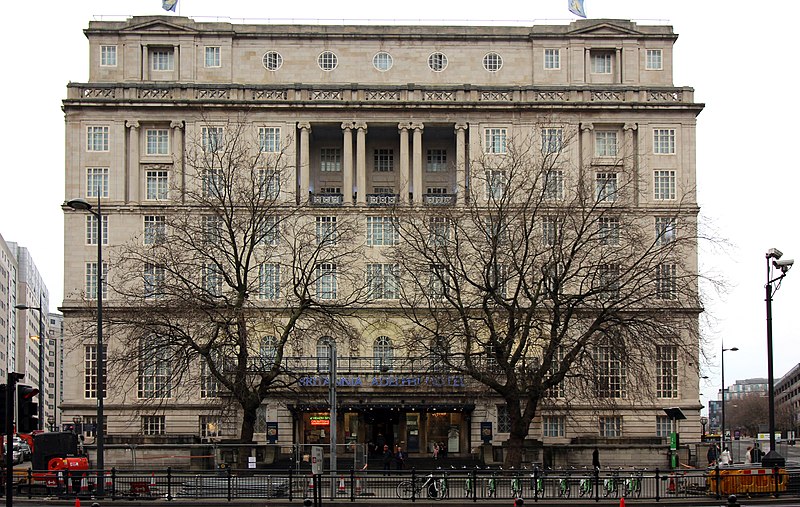 The prima ballerina, whose name I forget, was unhappily married and thought to be mentally unstable. She had, I was told, a magnificent suite. For her own protection, both in view of her emotional state and because protesting Jews supporting “refuseniki” (Soviet Jews supposedly wanting to emigrate to Israel from the Soviet Union— most ended up in California) might alarm her, a KGB man slept across her doorway all night, every night, in the manner of Russia’s ancient history.

In fact, that dancer was at risk— she later tried to commit suicide in Sardinia, by slitting her wrists in her bath. Her husband was constantly unfaithful, apparently. Also, she was about 40. Not good for a dancer, though the famous ones have often overcome age to retain public affection: Maya Plisetskaya, Margot Fonteyn etc.

In fact, those dancers (the couple) were living a golden or velvet life in Moscow. His and hers Mercedes cars, dacha, luxury apartment etc. A lifestyle most people (whether in Moscow or the UK) never experience. Still, money cannot, as such, buy happiness. It’s just a dull grind when money is short…

The Adelphi was, I thought, a good hotel at that time (now about 35 years ago). A quartet played classical pieces live in the opulent and huge foyer. Among those listening was the then Chief Constable of Merseyside. The hotel was a landmark in Liverpool.

The Labour Party is now weaker than it has ever been, in my view. Weaker even than it was under that unpleasant little hypocrite Michael Foot.

Labour under Corbyn, though weak, was stronger than it now is. Now Labour is going to —eventually— elect a new leader, which could be Keir Starmer, Rebecca Long-Bailey or Lisa Nandy. All have kow-towed to the Jew lobby, all have otherwise similar policies, though Rebecca Long-Bailey is the most radical of the three. Starmer looks likely to be the choice, because he frightens few horses; as against that, he is as dull as ditchwater.

Labour’s problem can be said to reside in the fact that, outside the Labour Party membership, few people even care which of the three becomes Labour leader.

Labour, for which 10 million voters voted in 2019, is scarcely in the exact position of UKIP after 2015, when UKIP gradually became a joke, an irrelevance and then eventually just a nothing. Having said that, there is a parallel. Labour now has no power to speak of in the Commons, because the Conservative Party majority of 80 can steamroller through almost anything.

Beyond that, there is the point that the Coronavirus rescue package of Rishi Sunak, whatever its deficiencies and flaws, has pretty much shot Labour’s fox on “austerity” etc. All Labour can say is “we would have done more and better…(if we were in power, which we are not, and will not be for years, if ever…)”.

Not a very impressive position. The msm continue to give Labour MPs a platform, as required by OFCOM rules etc, but in reality, Labour has become something close to an irrelevance. In fact, it has been reduced to supporting the Government’s positions in the present crisis.

It is clear that Iain Dunce Duncan Smith’s shambolic “welfare” “reforms” are not only completely stupid but cannot work administratively. Why is this surprising? After all, Dunce only got to Lieutenant in his 6 years of being an Army officer. He never had any responsible civilian job either. How could such a person really conceive a workable social security reform, even if “IDS” were a better person morally than he in fact is?

However, the collapse of the Universal Credit system and other DWP areas, under the weight of the Coronavirus burden, will not help Labour. In fact, any “opposition” will more likely come from within the Conservative Party itself.

I detect no real chance for Labour at present, nor for quite a while into the future. If ever.

I had not intended to make a ratissage on the supermarkets this evening, but in the end I did, mainly to get bread, a couple of food items and some cat treats. I went to the nearest one, a Waitrose outlet a mile or two away. I arrived about 1930, half an hour before closing time. Few customers, but an innovation: outside the wide-open doors, two security men, young and dressed entirely in black. Woollen hats, padded jackets, scarfs wound around neck, covering the lower face. Armbands. Exactly like the militia in the TV series, The Handmaid’s Tale. They lacked only the weapons. They are, it seems, Waitrose “marshals”.

Inside, bought 2 scratchcards (both modest winners, as it turned out), but at first my cash was refused. All part of the new hygiene regime. Card only.

I was curious to see whether the shelves were still being stripped bare. Most bread had gone, though there were a few of the less popular (and more expensive) types available: stoneground rye, sourdough etc. Eggs were very plentiful. Flour seemed to be unavailable. Pasta available, though only the slightly more expensive Italian-made stuff in blue and yellow packing; little of the cheaper “Essential Waitrose” pasta. Pasta sauces mostly gone, though the more expensive Lloyd Grossman jars were there (over £2 compared to £1 for the cheapest Waitrose own-brand line). I bought one jar. Puttanesca. Everything else seemed to be available for those wanting it, even loo paper (only the more expensive brands, though). I found the cat treats. No shortage.

I noticed that fruit, vegetables and everything else that I looked at in passing seemed to be in supply.

My conclusion from that and my drive around yesterday: the supermarkets are gradually getting on top of the bulk-buying/panic-buying wave. People are still doing it, but less so. There must be some people around here sitting on mountains of dried pasta, pasta sauce jars, bread and loo paper. I also noticed that people are obviously not buying the pasta to eat immediately, because there was plenty of fresh pasta for sale.

On the way back, a car would not wait for me at a junction and drove off at speed. A few minutes later, I saw a blue light in my rear-view mirror (when I was learning to drive, belatedly, at age 42, the instructor said that one of my faults as a driver was that I looked in the rear-view mirror more than I looked out of the windshield!). Anyway, I turned off to avoid any contact. Only a few seconds later, the police flashed past down the deserted rural A-road. Were they after that other driver? Was he a suspected Coronavirus “non-essential” driver? Had he been heard humming an Alison Chabloz song about “holocaust” fakery? We shall never know…

Watched a topical film on ITV2: Contagion, about an infectious virus that starts with bats in China, and then gets into the food chain, finally being transmitted person to person until millions are killed all over the world. Wait, wasn’t that the TV news? Oh, no, it was “just a film”…More seriously, I was slightly surprised that an alarming (though well-made) film like that was broadcast at a time like this.