Basic Income, an idea whose time has come?

My previous blog articles on the subject:

Some bulk-buying may not be so stupid in the present situation, but some is very silly and is clearly “panic-buying”, such as the old woman of whom I read, “caught” in an Aldi store trying to buy no less than 80 cans of tomatoes! Enough for months, surely? (She was only allowed 4 cans in the end).

I saw this in the Daily Mail online: 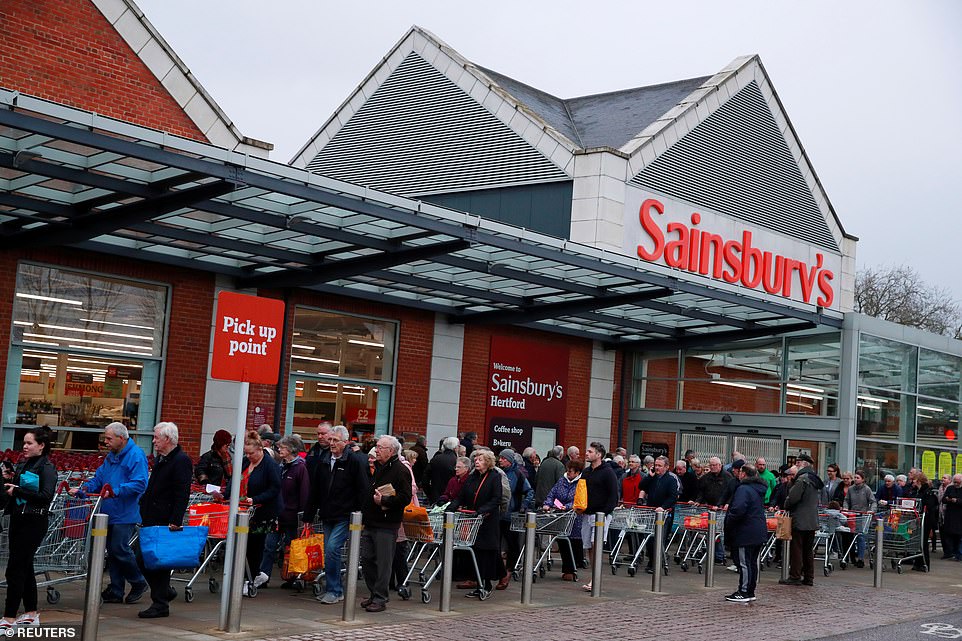 Sainsbury’s in Hertford, at opening time. The photo shows what is happening: hordes of old people (and a few “Vicky Pollard” “chavscum” mothers) lining up to imitate a cloud of locusts. Some stores are prioritizing the elderly, but that may be a misconceived idea.

Where I live, in a generally affluent part of Hampshire, the elderly (who are the majority of the population) are the ones who are bulk-buying almost everything. The local Waitrose is stripped bare within minutes. I spoke to a lady who had been there in mid-morning and already all loo paper, pasta, pasta sauce, tuna, bread, flour and cleaning products had gone; and that happens every single day, it seems. Affluent —or at least not poor— pensioners (many in large houses, with several fridges and freezers) are stocking up for Armageddon.

I went yesterday evening to a village shop and sub-post office. The village has no other shop, just a church, a pub-restaurant and a car dealer. The little shop is a grocery outlet which also sells booze and local produce (prepared crab, smoked trout and salmon, as well as pheasant and other game; local asparagus, local honey).

On an unrelated aspect, it seems to me that small shops and little post offices like that, in villages or areas without other shops, should not have to pay business rates, council tax or even other taxes (eg on profits), for good social reasons. A place like that is more than just a food, drink and postage stamps outlet. It is a community hub.

The owner told me that affluent old people had bought all the bread that morning and did so every morning, and were probably freezing it. This is an area where people, often in sizeable houses, and with comfortable incomes, have 2, 3, or 4 large fridges and freezers.

The joke is that those are exactly the people most likely to spout the “we won the war” stuff, about Britain being a “nation” (which it scarcely is now), “all pulling together”. They all vote Conservative and would deny that they are featherbedded in various ways.

It is not that I dislike the elderly, as such. After all, at 63 I am well on the way myself, and anyone under 40 is likely to regard me as quite “old” (though few who meet me realize that I am that old). However, it seems to me that there is a dual process going on:

Enemies of the people

I have just invented and instituted a new tradition on my blog pages, namely the “enemies of the people” section, to consist of tweets exposing enemies of Britain and Europe generally in the enemies’ own tweets.

I have decided to launch my new section by featuring two-in-one: a Jewish woman called “Dr Miranda Kaufmann”, as well as an apparently similarly inimical organization called “Octopus Publishing” (which may not be all bad; judgment reserved):

Something to add to the "To read while stuck at home" list. https://t.co/rmwLi1hjOu

“Infection” is the buzzword of the day. The fields of academia and publishing in the UK are both infected and infested; both need a purge.

One law for the rich…

BREAKING: Gatwick Airport is axing 200 jobs, stopping night flights and bosses have agreed to take a 20% pay cut as a result of the #coronavirus outbreak.

So “bosses” (whatever that means— in Sun-speak, it can just mean a middle-manager) are taking a pay cut, but the “workers” are being “axed”…

Pakistani woman and four others attacked a schoolgirl (was she English? Probably), punching her, ripping out hair, then later intimidating her on Facebook. Found guilty on overwhelming evidence but still denying her guilt. Result? Non-custodial sentence. Quelle surprise. Sentencing judge ludicrously says that “the offence was so serious that he could have sent Mahmood to prison, but decided to spare [her]” because the w** woman is mother of four children and is carer for her mother. And (unsaid) the British people pay for all six of the bastards…and probably others in the family/clan…

Why are they even here? Why do they exist here?

I agree with much of this: https://www.independent.co.uk/voices/coronavirus-rishi-sunak-business-bail-out-banking-crisis-a9411771.html#r3z-addoor

“We have, of course, been here before, 10 years ago when the banks were bailed out with few conditions being attached to the money that flowed their way. As a result, they were able to use a chunk of it to keep their top tier employees in the style to which they had become accustomed while branch staff were losing their jobs.” [The Independent]

We still celebrate the end of the Fawkes plot by burning an effigy on a bonfire, the effigy being, even after over 400 years, called “the Guy”. What about Dunce Duncan Smith? Ideas on a postcard…

What are the Jews up to?

“Israel’s secretive Mossad intelligence agency launched a covert international operation this week to fly in up to 100,000 coronavirus testing kits…The local broadcaster Channel 12, which first reported the operation, said Mossad had intended to bring in about 4 million kits from several countries. About 530 cases have been confirmed in Israel, which has taken stringent measures to contain the spread, including shutting down all schools, cafes and malls. On Wednesday evening, it barred all tourists and visitors from entering the country.” [The Guardian]

Why is British intelligence not as active as that? Are they even worth their salt?

Sadly the photographer truncated the phone number of this fine establishment. If you want to get in contact about their fine merchandise they are on +4402085481931

I don't know, just asking. Is there much choice in London now?

It’s happening in Portsmouth. They’ve even put an extra £4 on cigarettes. People need to stop using these shops, even when this crisis is over. Show them who’s boss. It’s us, the customers.

In Edgeware a chemist , Derek Coles , is selling masks for crazy prices and Hand sanitiser for £30 !!! pic.twitter.com/rbx4ArfDoL

The Earth can heal and cleanse itself, given the chance…

The canals in #Venice suddenly became insanely clean. Due to the lack of tourists in the country, it happened that nature was cleansed.

Does Trump have some kind of dementia?

This [below] is supposedly a genuine clip…