The new emergency legislation being put forward has a life of, at present, 2 years, until 2022, despite the assertion by Boris-idiot that the Coronavirus crisis might last only for 3 months more, i.e. until June 2020. Already, local elections have been deferred for a year. It may be that NWO/ZOG dictatorship is planned, not only in the UK, but across Europe. I would not rule out civil or social war by 2022.

Twitter is doing what it does best, namely allowing people to tweet well-meaning and totally ineffective pleas. In this case, under hashtag #StopHoarding, to those who imagine that they need 500 loo rolls and a mountain of pasta and bottled water.

As I have blogged on previous days, there is (possibly reasonable) bulk-buying and there is (wholly unreasonable) panic-buying. Yesterday, at 1900 hrs, I visited the little village shop about 2 miles from me, and which I have noted in previous posts. It shuts at 1930. I bought almost the last loaf of bread, a bunch of bananas, some locally-produced asparagus and a few lottery tickets.

I wanted to see whether Waitrose in the nearest town was offering much, and mistakenly thought that it closed at 2100 on Thursday. Turned out that it closes at 2000 on Thursdays, so I arrived with only 10 minutes to get anything I wanted. That being so, I was unable to see whether shoppers had stripped the shelves bare again. I did notice that there was not a single egg left, not even the more expensive ones from rare breed chickens, with sky-blue shells. I myself bought only (again) almost the last loaf of bread and a reduced-price (99p reduced from £2-75) North African vegetable and cous-cous salad thing (which turned out to be quite tasty).

I think that this panic-buying can be halted by supermarkets only allowing one item or pack of anything per shopper. Inconvenient, yes, and some would then go to half a dozen places to evade the rule, but most would not and it would restore equilibrium.

Well done, @HullLive [http://hull-live.co.uk], and well done “Will Wright of Hull”, whoever you are. The truth is rarely seen in the newspapers in the UK. 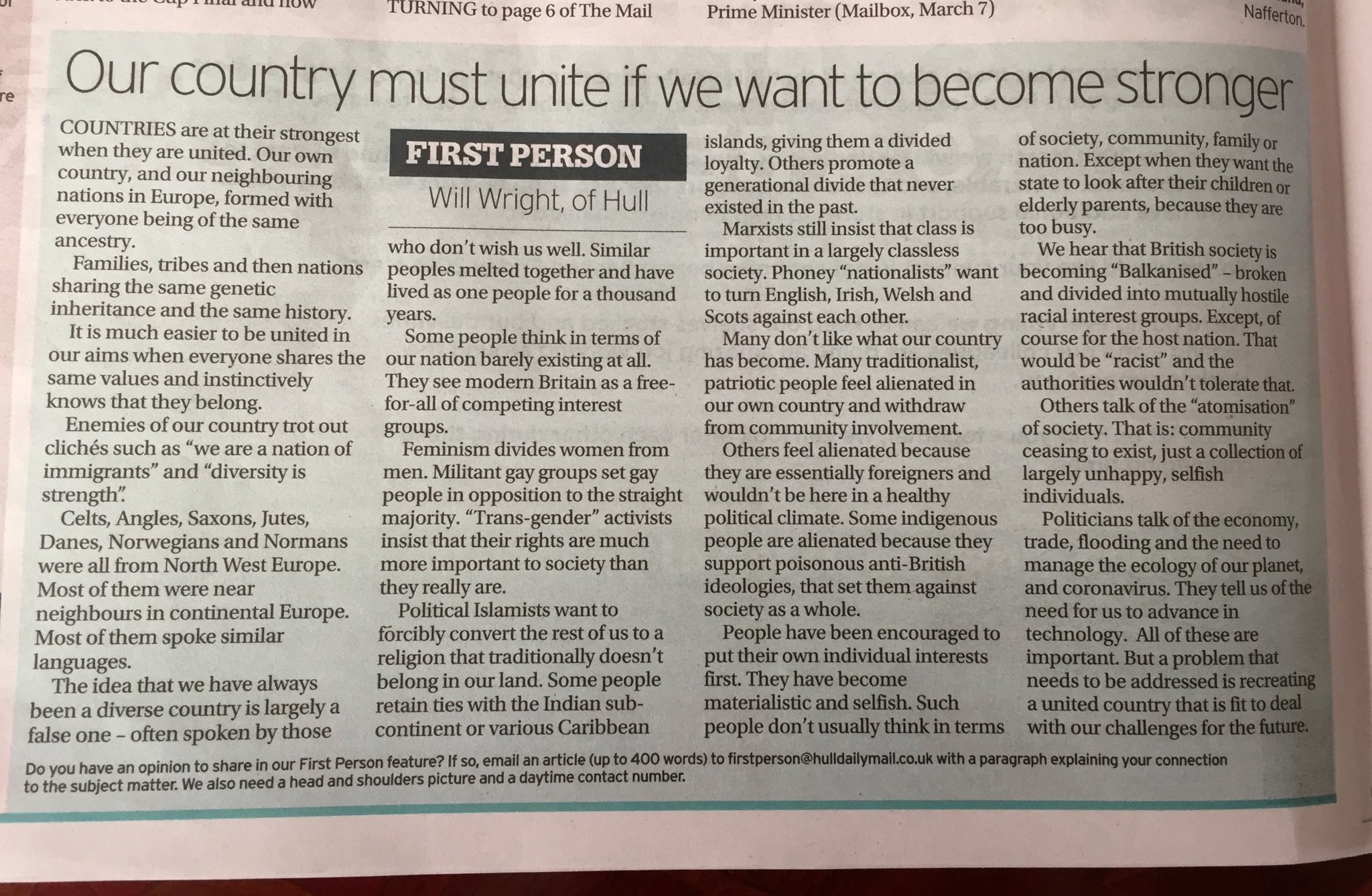 “Socialism” has almost as many meanings as “democracy”. We still see people with pedestrian understanding writing or tweeting about how “socialism” is and can only be something akin to the Marxist-Leninist setup of the period before the great change(s) since 1989. Those people say that German “National Socialism” was not “real” socialism. Yet German National Socialism gave the German people a great deal more in every way, both economic and cultural, than did either Weimar Republic social democracy or post-1945 Soviet-style DDR (East German) socialism.

Of course, socialism in the Soviet Union had various faces at various times, from Civil War times (1918-21) when militarization of the workforce was the norm (“War Communism”) to the New Economic Policy of the 1920s under which a controlled form of capitalism and private enterprise was permitted, to the harsh centralized system of Stalin in the 1930s and 1940s, a less severe version in the 1950s to 1980s, and then the fall of the various forms of socialism, all over the world, from 1989.

Hitler took a broad view of the term “socialism”, regarding it as meaning, broadly, “the common weal”. He was not hidebound by artificial or arbitrary “definitions” of what socialism means. For him, what mattered were results. So long as the German people were well-fed, housed, educated, organized etc, he was content.

For me, policy matters, as do results. Artificial theory matters less. I was, at one time, in the mid-1970s, accused of not being so much a National Socialist as a “National Communist”, in other words accused of over-valuing the role of the State. I demur. However, the State does have its rightful place (as seen in the Threefold Social Order concept: https://en.wikipedia.org/wiki/Social_threefolding).

We in the UK have seen in the past decade what happens when the role of the State is cast aside or into the background. Now, with the Coronavirus crisis, we see that the State, in its weakened condition, is unable to properly fulfil its role of guardian of the people (“…for the welfare of the people is the highest law“— Cicero).

What is now required is what might be called “social nationalism”, not old-style State socialism but a system whereby the State, in its proper place, protects and serves the people and, as part of that, regulates but does not actually run economic enterprises and markets. “Nationalism”? All that that means is that the political organization is rooted in our basically “Aryan” European culture, history and way of life.

A group of 500 academics have signed an open letter to Govt: "It is time for Govts to enact emergency universal basic income, ensuring that everyone in their jurisdiction has enough money to buy the food & other essentials they need to survive.” #UBI https://t.co/LjrOLx9pm8

My previous blog articles on the subject:

How long before it becomes necessary to start shooting looters?

London adults:
On placing the capital on lockdown, where people are not allowed to leave their homes except to go to work or get essential supplies:

So little Matt Hancock, clearly out of his depth, has been told to “recall” retired doctors and nurses. My thoughts:

Worth reading, certainly, but of course the Jew scribbler never once mentions the racial divisions or aspects.

A snapshot of Stuttgart life under Coronavirus, from “antifa” cheerleader Mike Stuchbery, who was all but run out of the UK on a rail in 2018.

Message getting through in Stuttgart. Far less seniors out, only folks heading to the supermarket. Saw less than five joggers. We may be okay. This path is usually crowded by those running. pic.twitter.com/C5aBoo48YE

Stuchbery, “writer”, “journalist”, “historian” (all self-descriptions) and one-time schoolteacher, apparently does not know the difference between “less” and “fewer”.

A midnight ramble through Casablanca and beyond

[above: La Marseillaise trumps Der Wacht am Rhein in Casablanca]