this is the motherload of unlikely simultaneous historical events https://t.co/hnPL8kxIql pic.twitter.com/cF3zz4L7wK

An interesting tweet by one Ed West, but why am I still surprised that a “deputy editor” and published author is apparently unaware that “motherlode” (also “mother lode”) is not spelled “motherload”? https://en.wikipedia.org/wiki/Mother_lode

I always wondered where Private Eye magazine got that term, “discussing Uganda“… https://en.wikipedia.org/wiki/Mary_Kenny#%22Ugandan_discussions%22

If there ever was a pointless contest!…

True, I have been writing off the LibDems since the betrayals of 2010, but the trajectory remains downward. 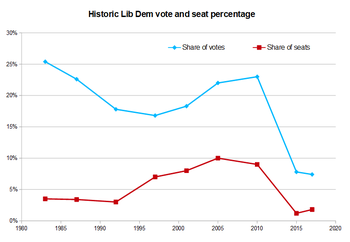 Looking into it a little more, it can be seen that the LibDems benefited a little from being the only 100% Remain party. Next time? I still think that the LibDems will be wiped out. Few of their MPs have a strong local following to set against the party-label vote swings. Also, what is the standout profile of the LibDems now? They have no real identity, it seems to me.

Surprisingly, the LibDem membership numbers are not unhealthy: over 120,000, it seems, which is in the same ballpark as the Conservative Party. However, that alone does not bring electoral success (cf. Labour, with perhaps 600,000 members).

I should expect the LibDems to decline further and perhaps to disappear, at least as an independent party.

Print newspaper sales figures are supposed to be out today. But following industry representations, they no longer have to be made public. The monthly ABC sales charts have also been stopped permanently as they give "stimulus to write a negative narrative of circulation decline".

Well, there it is. The print newspapers are mortally ill and maybe on their last legs. These screeds of rubbish have been declining in quality as long as I can remember. In the 1970s, the quality level was better by far. The old Daily Telegraph magazine, published on Fridays, contained serious reportage and interesting feature journalism: see

Look at the Telegraph itself now! Uncritical Boris Johnson “Conservative” propaganda, and at an excruciatingly low intellectual level. Ironically, though, it was the Telegraph, in the 2005-2010 Parliament, that broke the MP expenses scandal, one of the most serious stories of the past half-century. It does say something about the UK’s “free Press”, though, that MP expenses were an open secret for years, certainly since 1997 and the corruption Blair brought into UK politics, yet were not investigated until the Telegraph decided to take it all seriously and to print.

In the 1970s, even some of the less-serious or less intellectual newspapers, such as the Sunday Express, sometimes contained interesting first-person accounts and so on.

Look at, say, The Times now! Pathetic and shallow “Conservative” and Zionist propaganda. As for the Sunday Times magazine, more or less what used to be called a “woman’s magazine“, full of ads and with little substance in its content.

I welcome the demise of the print newspapers and their fundamentally Zionist-contaminated agenda.

They even decided to print one-sided stories about me back in late 2016! (Google “Ian Millard barrister” to see some).

True, those newspapers all have an online presence now, but the Times and most of the Telegraph are behind a paywall and, like the others, have to compete for public attention with other sources of news, some of which are, mirabile dictu, not so (((infested and contaminated))).

Why not @newpaulhearn? The point about Sweden was what it did *not* do – house arrest and economic self-strangulation. One week's mortality figures, taken in isolation, don't make a case for these futile measures. Think rather about this : https://t.co/lBf0wM3xLr https://t.co/jV9pazJaMJ

Where I deviate from Hitchens in respect of the above is that the number of “lives blighted” should be at least 36,000, maybe as high as 90,000. Why? Most employees laid off have wives (or husbands), children too. Then there is the knock-on effect on the local retail sector as local purchasing power diminishes. Also, redundancies in the supply chain.

Not exactly surprising. There has been a Jewish coup in Labour, one over 4-5 years. Starmer is its figurehead. He is not a Jew, but is married to a Jewish woman (a lawyer) and their children are being brought up as Jewish…

I thought that the Jewish Chronicle had gone up the chimney. Seems not.

I happened to see this rather inaccurate report about the Alison Chabloz case, which was heard two years ago:

Despite being in the august pages of the Criminal Law Journal, the report, penned by one Laura Bliss of Edge Hill University in Lancashire [https://en.wikipedia.org/wiki/Edge_Hill_University] misdescribes (?) Alison Chabloz as “a holocaust revolutionist“! Well, if the cap fits, though “revisionist” was probably the term used in court. Ms. Bliss also mispells Elie Wiesel’s name as “Wiezel”. How about “weasel”?

Sadly, most of the report is behind a paywall.

Below: looks as though someone has woken up, at least…

My feelings exactly: Boris Johnson, Boris-idiot, completely out of his depth as Prime Minister, a part-Jew public entertainer, is turning the UK into a banana republic. It was already on the way there, but that idiot has made it official

Still, so what if he bunged one of his not-very-interesting-looking girlfriends a hundred grand or so out of public funds? Worse things happen in black Africa…oh, wait…

Nobody is the slightest bit surprised that Boris is not going to be investigated in the Jennifer Arcuri scandal. I am sure all Bullingdon club members pretty much get automatic membership of the same Masonic lodges as senior police & other powerful types get into.

The UK government is currently [X] to Covid-19:

Seems that only 12% of people have really thought this through, while 47% are a panic-stricken mob.

Look at the graph below. Look at “actual impact”…

A complete busted flush. The man has the gall to continue whining about illegal migration (migration-invasion) to the UK, while having stabbed in the back his own party (parties, really, meaning both UKIP and Brexit Party) because he wanted to enable the victory of the misnamed “Conservative” Party, and (of as much importance for someone who is plainly another doormat for the Jewish lobby) the defeat of Corbyn’s Labour Party.

I just witnessed the French Navy escorting illegal migrants into British waters, despite the money we are paying them.

They even tried to prevent us from filming the handover, as you can see in the video.

This is an outrage and a scandal. Time for the government to get a grip. pic.twitter.com/hT8ctbZag5

Of course, what he says about the invasion is true, but he carries no weight. It is partly because of his electoral manipulation that the present government has a large majority; thus a thick-as-two-short planks Ugandan Indian, Priti Patel, now sits, uselessly, as Home Secretary, doing nothing to stem the invasion (of which she herself and her parents were part, albeit in the wider sense).

This is what happened when Nigel Farage travelled offshore and witnessed an illegal migrants boat being handed to the British Border Force. @Nigel_Faragehttps://t.co/6TJXwRLUuf

and see here (below) a metropolis-based newspaper drone (columnist, deputy editor), one Sarah Baxter, laughing at concerns around the migration-invasion. Well, why should she worry? £500,000 a year (at a guess)? Large house or penthouse? Good neighbourhood(s)? Second home in the country?

The Sunday Times' @SarahbaxterSTM mocked: “The old @Nigel_Farage immigrant song sounds way off key”.
2 million have watched #Farage's video in 24 hrs. Who is “way off key” now, Sarah? Your paper sells barely a fifth of the audience the film has reached. https://t.co/M3Q0ZwX2xy

Well done @SkyNews and @skymarkwhite for also showing the French escorting of illegal migrants into our waters.

Now time for the BBC and ITV to wake up too. https://t.co/0GYJbTEqO0

There are nine migrant boats reported in the Channel, looks like another record day already.

The invasion continues yet the BBC and ITV won't report this.

No wonder trust in the media is lower than ever.

Yes, he is right. Trust in the mass media, especially the BBC, is at rockbottom: 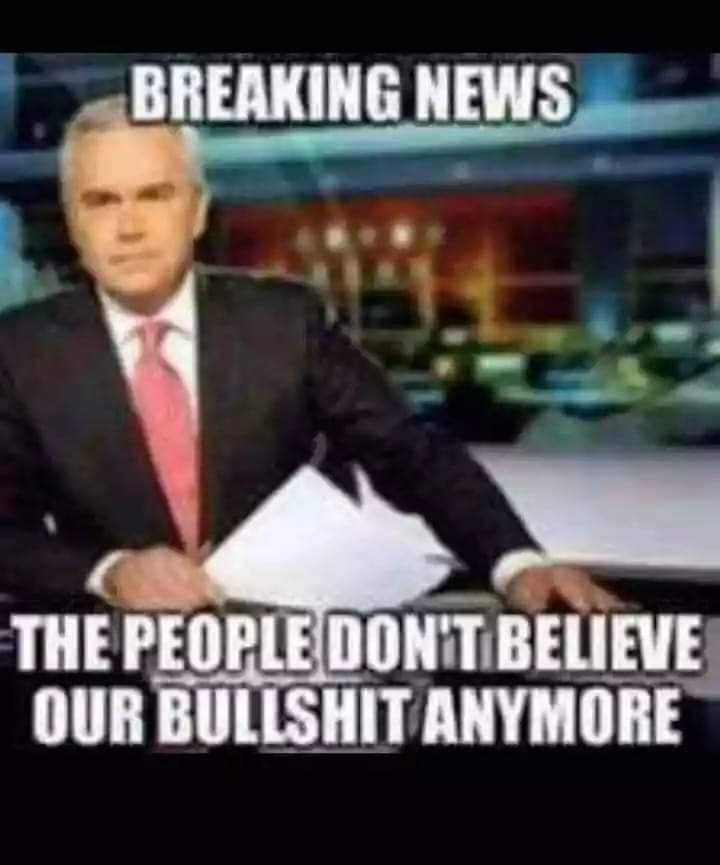 For anyone that doubts me:

Here is the proof that the migrant boat on my film today was escorted from the French coast into UK waters by the French Navy.

This is a national scandal. pic.twitter.com/AwfXJ2W69L

You won’t hear about this scandal in Parliament, so retweet the video and spread the truth.

As I predicted weeks ago, Pett Level is a favoured landing beach for migrants.

This exclusive video from Saturday shows a group being caught. Many more are not.

This is proof that the sneering media were wrong to attack me for my film. pic.twitter.com/SYTIbluYH4

This is an organized and/or facilitated invasion of this country, an invasion by persons who have no connection with Britain, and who will be millstones round the neck of the people.

Anyone who supports the invasion in any way is treacherous.

This is, to be rather topical, like a foreign element entering an organism, breeding fast, and eventually killing the host. 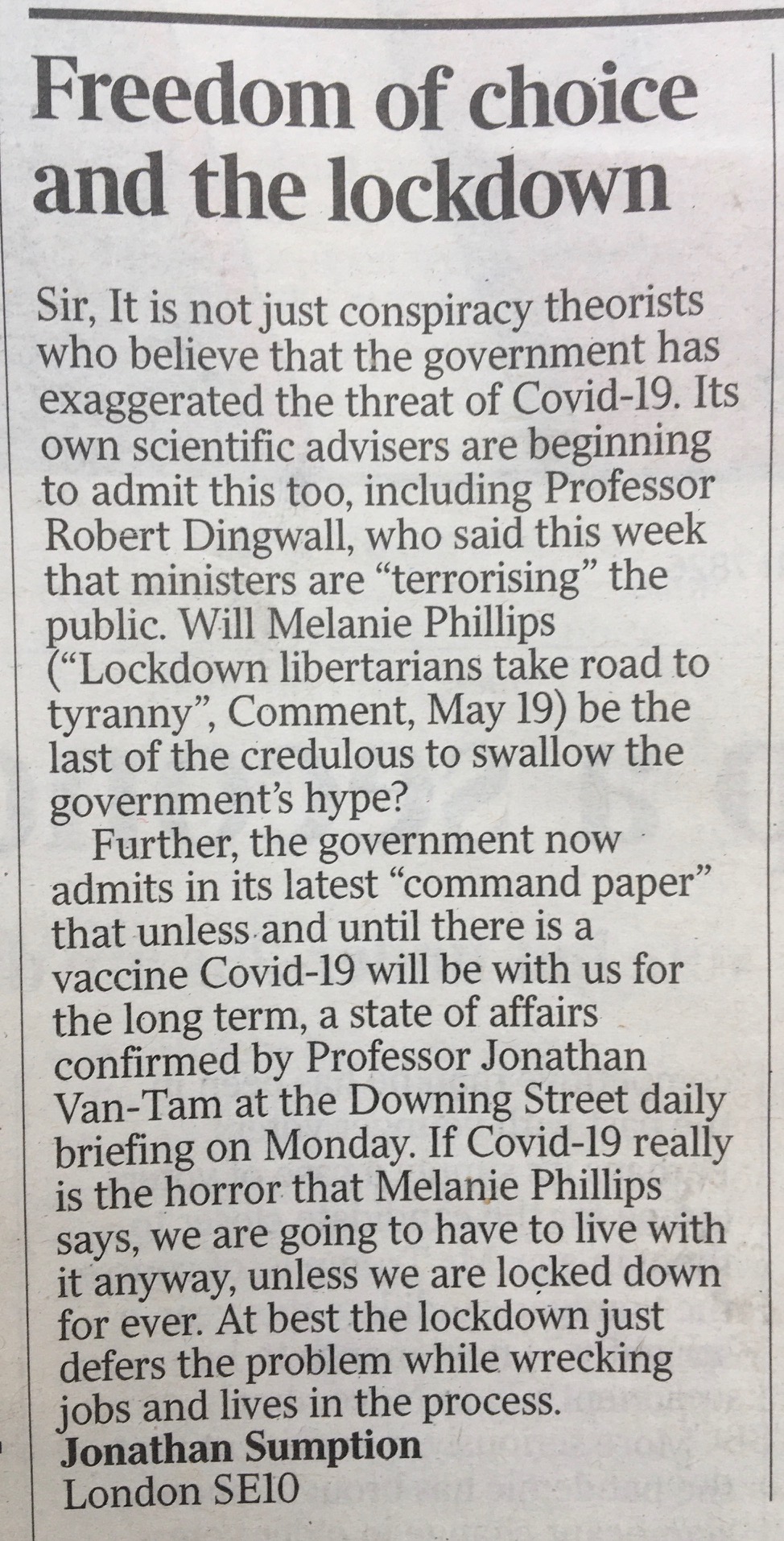 Govt adviser prof Robert Dingwall says the Government's coronavirus warnings have "effectively terrorised" Britons "into believing that this is a disease that is going to kill you" even though most those infected will not be hospitalised.https://t.co/lGVEa7nY3x

Extraordinary. Can YouTube confirm and explain this extraordinary action? Internet appears to be a policed despotism rather than the free republic people used to think it was. https://t.co/DeSOEFEDjx

Hitchens should look to the source…

…while not forgetting the “useful idiots”…

Professor Sunetra Gupta of Oxford ' Different countries have had different lockdown policies, and yet what we’ve observed is almost a uniform pattern of behaviour.' https://t.co/gYhlKnsDg9

'…the data show that the relative strictness of a country’s containment measures had little bearing..' https://t.co/hVzxQFZO6M

The real #COVIDIOTS are running the show!
https://t.co/eascdJSGmI

Had to emerge from my cave to complete my appointed rounds. On the return journey, my less than contented mood was made worse as I went through a more or less suburban area, only to see some rabbits waiting at the end of their short drives or standing in gardens, about to participate in the State-promoted and socially-mandated “clapathon”. Not many, about one house out of about 20, I would say. Mostly very elderly, though there were a few odd children too. The sight of all the rabbits standing waiting, like robots, or serfs populating Potemkin villages, irritated me even more than it usually would.

Note to govt: It's no use praising yourself for rescuing someone from drowning when you have yourself just pushed them into the sea. Rishi Sunak's magic money furlough payments would not be needed, if he hadn't shut down the economy. https://t.co/bDTaVfPmXH

Do you @john01162565 have *any * evidence that mass house arrest and throttling the economy have saved a single life? If so, tell the government because they don’t have any. https://t.co/BbUqTrxyzp

There are signs that serious size businesses are starting to realise that a #covidcoup by power hungry states & anti-human Deep Green ideologues is not such a good idea after all.

If the elite splinter on this, things could get very unstable very quickly.#interestingtimes pic.twitter.com/MhpyVHoQez

Some music to soothe the cares of the day